I have recently started with the development and implementation of the hard- and software that will enable us to investigate technologically mediated social support during a stressful event (that is, the anticipation of a unpleasant yet quite safe electric shock). Technologically mediated social support will be simulated through a device to simulate pressure (an Holland Haptics “Frebble“, individually controlled over Bluetooth UART) or a device to warm up or cool down the skin (my digital thermoregulating bracelet). In some of the blocks, the people’s partners will ostensibly control the device (but in reality will be preprogrammed). In other blocks, we will tell the participants that the computer will control the device. During the experiment, participants will indicate their level of negative affect through a “dial button” (Wesselmann et al., 2012).

The experiment will be coded in OpenSesame, which will control both an Arduino (which controls the thermoregulating bracelet) and a Bluetooth BLE stick (which communicates with the Frebble). Source code will be made available on this page on completion of the project.

I got some requests on how we were able to make the Griffin PowerMate work with OpenSesame.

There seem to be several ways to do this – though the easiest way to make the PowerMate work with OpenSesame proved to just install the official PowerMate software on your computer and configure it correctly.
Some have reported problems with recent versions of Windows, but we were able to install PC version 2.0.1 on Windows 10 without any problems.
Then assign the PowerMate’s rotate left and right actions to “Move the Mouse Cursor to the left” versus “Move the Mouse Cursor to the left”, and emulate a “Mouse Left Click” on pushing down. 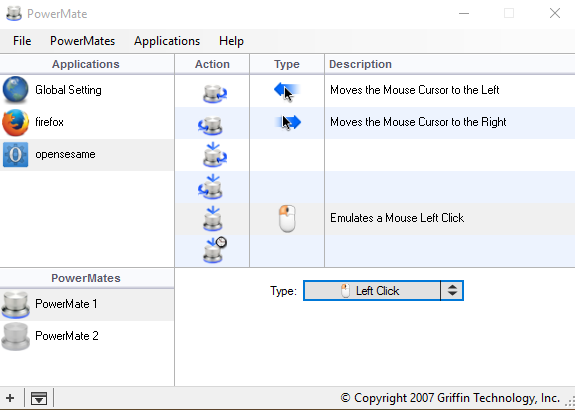 You can now, for example, install Edwin Dalmaijer’s OpenSesame “Slider” plugin and move the slider to the left or the right by rotating the PowerMate and continue to the next question by pushing down on the PowerMate’s knob.