In order to meet an increasing interest in the topic of social touch research from a diversity of disciplines, Gijs Huisman (PhD candidate at Twente University) spearheaded the 1st Dutch Meeting on the Study of Social and Affective Touch in Utrecht on July 3rd, 2015.

Right next to where the Tour de France’s Grand Depart would be happening the next day, 19 people representing six universities and three companies from all over the Netherlands gathered in a re-purposed sand funnel. The aim of the day was to become informed about each other’s work, and look for ways to collaborate in the future. Most representatives of the universities and companies gave brief talks about their work, and how it relates to social and affective touch. 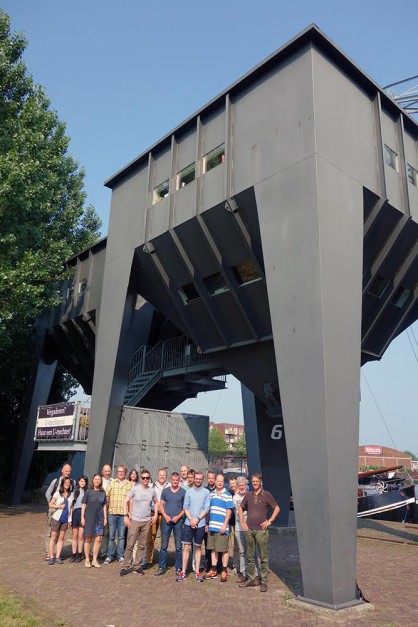 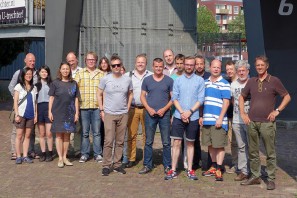 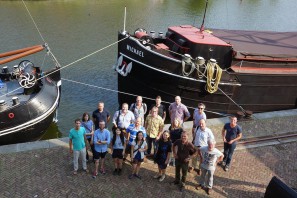 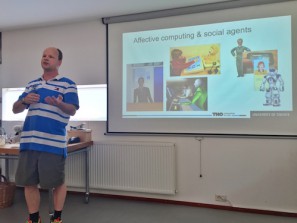 In the first talk, Jan van Erp (TNO/UT) shared his views on how social and affective touch should be approached from a computer science perspective, covering mediated social touch, and social touch by robots. Karen Lancel (TUDelft) shared some of the work she has done in collaboration with her partner Hermen Maat, including the fascinating projects EEG KISS and Saving Face, that incorporate touch in artistic installations. Ben Kröse (Hva/Uva) introduced the Internet of Touch project, which involves the design of sensing and actuating technologies for touch over the Internet. Going into more detail on how to incorporate touch sensing and actuating technologies into textiles, Wouter Vos (Elitac) explained Elitac’s involvement in the Internet of Touch project.

The talks during the first half of the day approached social and affective touch mainly from a technological perspective. During the second half, speakers provided more insights from a psychology perspective. Antal Haans (TUe), shared some of the lessons learned from experiments into mediated social touch, and provided pointers for future research. Next, Frederic Petrignani from the tech start-up Holland Haptics, talked about his journey with Frebble, a device for holding hands over the Internet, from the very first idea, to a fully functional product. Mandy Tjew a Sin (VU) showed some very interesting experiments about the effects of soft soothing touch (e.g. the feeling of a teddy bear) on feelings of social connectedness and anxiety. In the final talk of the day Chris Dijkerman (UU) presented some amazing work on how touch, specifically touch that is optimal for CT-afferent fibers, relates to body ownership, and how systems such as Roger Newport’s Mirage can be used to trick one’s sense of body ownership.

In the closing discussion there was a lot of positive feedback about this first symposium, and many ideas for how to continue in the future. As this initial meeting was such a success we are currently planning the next meeting for after the summer. From the feedback that we gathered, this will be a more hands-on affair in which we will focus on the future of social and affective touch research in the Netherlands, ways that we can collaborate, and how we might form a society around the topic.